There are two African countries – Nigeria and Angola – among the top 20 countries that South Africa imports from and seven among our top twenty export partners. (See figure below). While clearly so well positioned to capitalise on the continent’s growth trajectory, we fail as a nation to promote a cohesive African strategy. This is starkly highlighted by our government’s silence on the Nigerian state abuse of Standard Bank and MTN both of which have made a substantial commitment to investment in the West African country. 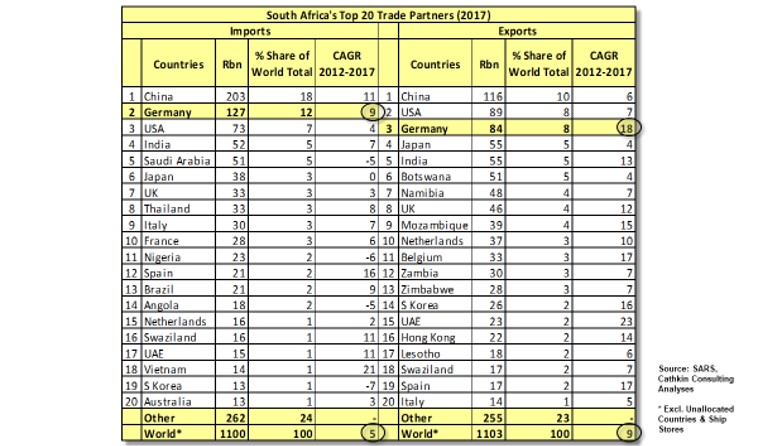 The WOW report on Air Transport and Air Ground Handling Services illustrates how lack of vision by the previous South African Airways management has rendered it incapable of meeting the challenge of strong competition from African carriers including EgyptAir, Ethiopian Airlines and Kenya Airways, with international players such as Qatar Airways, Etihad and Emirates posing an even bigger threat.

Approximately 70 million passengers are transported annually on the continent, but African airlines currently carry only 18% of international travellers to and from Africa, with the bulk (82%) carried by international airlines.

Ethiopian airlines has been particularly aggressive in freight transport and, according to the WOW report on Cargo Handling, Storage and Warehousing, it dominates the East African region’s cargo market by transporting at least 240,000 tons annually, compared to 58,000 tons by Kenya Airways.

A further interesting statistic on Ethiopia, according to the WOW report on ICT in that country, is that of the 20 million mobile phones sold annually to the country’s 105 million population, an estimated 12.2 million units per year are manufactured locally.

Ethiopia’s government announced in June 2018 it would allow private domestic and foreign investment in state-owned telecoms, aviation, shipping and power companies. This was a major policy shift, one which analysts believe could loosen the state’s grip on the economy. But does South Africa have the will to participate?

According to the WOW report on Dairy Products in East Africa, more than 80% of milk is produced by smallholder households and small-scale dairy farmers who lack modern equipment and distribution networks. The established South African Dairy Industry should be able to use their IP and resources to boost production, packaging standards and distribution for these markets.

Former president Thabo Mbeki had a continental vision, and there was a relationship between state and business, giving the Presidency access to the best corporate and economic advice through the Panel of Economic Advisors. All of this disappeared during the inward-looking and self-serving Zuma era.

South Africa signed the Africa Tripartite Free Trade Agreement in July 2017 which includes 29 countries in Southern and East Africa, and president Ramaphosa signed the African Continental Free Trade Area agreement (AFCTA) in July this year which binds all the 55 African Union states with a combined population of 1.2 billion people and a GDP of more than US$3.4 trillion. The Economic Commission for Africa estimates that AFCTA could boost intra-Africa trade by 52.3% by eliminating import duties.

The African opportunity can only be realised by South Africa if the state and business agree on common objectives and their respective roles in achieving these objectives.

Not since the Nelson Mandela era has the potential been greater for business and the state to play to their respective strengths to realise the vision of the NDP and for SA to gain meaningfully from the expected explosive growth on the continent.