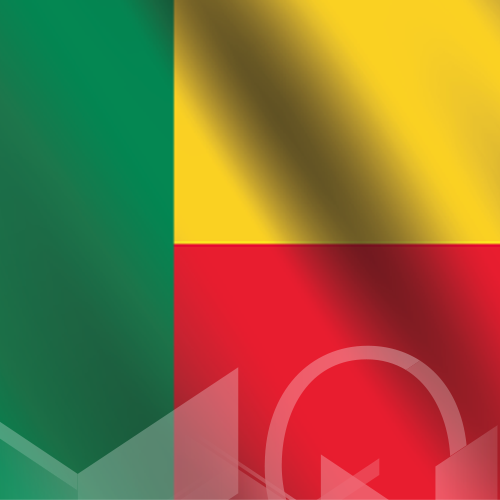 Bordered by Togo, Nigeria, Burkina Faso, and Niger, Benin has a 121-kilometer-long coastline on the Gulf of Guinea and a population of close to 11.5 million (2018). Benin has recently been carrying out key economic and structural reforms.

Political Context
Benin is a stable democracy, despite some tension surrounding the legislative elections held on April 28, 2019. The most recent presidential elections held in March 2016 were won by the multi-millionaire cotton tycoon, Patrice Talon. The government currently enjoys an absolute majority in Parliament (83 deputies). In accordance with the party system reform approved by the National Assembly in 2018, several political parties and movements were merged to create a new charter of political parties. Benin now has around 10 State-recognized parties compared to over 200 identified parties prior to the reform. The next commune-level and local elections are expected to be held in June 2020.

Economic Overview
Benin's economy is heavily reliant on the informal re-export and transit trade with Nigeria (estimated at approximately 20% of GDP), and on agriculture. Despite a recent downward trend, the poverty rate remains high, at 46.4% in 2018, with a poverty line of $1.90 a day in purchasing power parity.

Economic activity accelerated to 6.7% in 2018 from 5.8% in 2017 (a per capita GDP growth rate of 3.8%), driven by vibrant port activity (+8.5% in 2018) and a sound agricultural sector buoyed by record cotton production (+17% in 2018) and the diversification of emerging export sectors (pineapple, cashew nuts). Growth was also driven by the lagged effect of public investments (particularly infrastructure) and a vibrant services sector. Inflation remains moderate at 1% in 2018, in view of the prudent monetary policy implemented at the regional level.

The current balance deficit (excluding grants) fell from 10.2% in 2017 to 8.5% in 2018, caused by an increase in agricultural exports and a reduction in food imports. The key export products in 2018 were cotton, cashew nuts, and pineapples, while energy and petroleum products made up the bulk of imports.

Like the eight countries of the West African Economic and Monetary Union (WAEMU), Benin’s monetary policy is managed by the Central Bank of West African States (BCEAO), which keeps the CFA franc pegged to the euro. The BCEAO’s foreign exchange reserves reached 4.5 months of imports in 2018, against 4.1 months in 2017, essentially owing to the issuance of Eurobonds by Senegal and Côte d’Ivoire and community-wide fiscal consolidation. Despite a tighter monetary policy in 2018, regional liquidity pressures were mitigated by the issuance of Eurobonds. After remaining stable in 2017, the real effective exchange rate (REER) rose 2.4% in 2018, reflecting, in part, the strengthening of the euro.

Social Context
Despite steady, robust economic growth over the past two decades, poverty remains widespread owing to limited growth in per capita terms (only 1.6% on average during 2006–16). National headcount poverty rates were estimated at 40.1% in 2015. Female-headed households experience lower levels of poverty (28% compared to 38% for male-headed ones), but generally women suffer from a lack of economic opportunity and are under-represented in high-level decision-making positions. The education and health sectors account for a significant share of public expenditure (23% and 7%, respectively, on average). Greater public spending efficiency and a more equitable geographical distribution of resources would pave the way for lower poverty rates and more inclusive growth.

Development Challenges
Benin is vulnerable to exogenous shocks: climate hazards, varying terms of trade (cotton and oil prices), and developments in Nigeria—its main trading partner and the main source of its economic activity as 80% of Benin’s imports are destined for Nigeria. The economic recovery in Nigeria, where the recession officially ended in September 2017, drove growth in Benin.

Despite some progress in the formal sector, Benin’s weak business environment continues to deter domestic and international investors. Benin occupies position 93 on the Logistics Performance Index and ranks 153 out of 190 countries in the World Bank’s Doing Business report on business regulation. Benin has recently made progress in “starting a business” and “getting electricity,” but must, however, do more in the areas of “getting credit” and “paying taxes.” Moreover, despite strides made, Benin continues to grapple with major corruption-related challenges, ranking 85 out of 180 countries on Transparency International's Corruption Perceptions Index for 2018, with a score of 40/100.