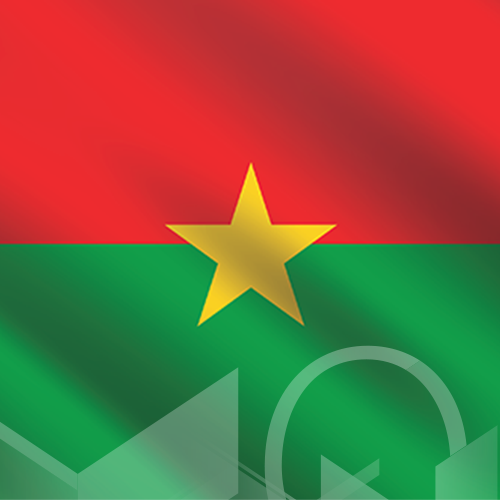 Burkina Faso is a low-income Sahelian country with limited natural resources. Its economy is largely based on agriculture, which employs close to 80% of the working population, although gold exports have increased in recent years. Despite the progress made in the past two decades, Burkina Faso faces many development challenges, particularly in terms of health and education. It ranks 144th among 157 countries in the new human capital index established by the World Bank and 40.1% of the population lives below the national poverty line. Furthermore, insecurity linked to frequent terrorist attacks since 2016 has created an unprecedented humanitarian crisis.

Political Context
Growing insecurity, particularly in the north, close to the border with Mali and Niger, has displaced many residents of Burkina Faso. In January 2019, fewer than 50,000 people were internally displaced, while in March 2020, this number stood at roughly 765,000. At that time also, more than 2,000 schools were closed, a situation that deprived some 300,000 students of an education and impacted more than 11,000 teachers.

In July 2017, the African Development Bank, the European Union, France, Germany, the United Nations Development Program and the World Bank launched the Sahel Alliance with the aim of providing a coordinated and tailored response to the challenges faced by the G5 Sahel member countries (Burkina Faso, Chad, Mali, Mauritania, and Niger). Since then, Denmark, Italy, Luxembourg, the Netherlands, Spain, and the United Kingdom have joined the Alliance.

Presidential and parliamentary elections are scheduled for November 2020. For the first time in the country’s history, citizens of Burkina Faso in the diaspora will be able to vote from abroad.

Economic Overview
Despite the security and humanitarian crisis, the macroeconomic framework remained broadly stable in 2019. Although real GDP growth fell slightly, it remained fairly strong at 6%, compared to 6.8 % in 2018. Economic activity was led mainly by the services sector, the growth of which offset the decline in activity in the agricultural, mining, and construction sectors.

Inflation fell from 2% in 2018 to -3.2 % in 2019 owing to the combined effect of a good crop year, which led to a decline in food prices, and lower telecommunications costs.
The fiscal deficit improved in 2019 (-2.6%), thus falling below the 3% figure stipulated in the West African Economic and Monetary Union (WAEMU) convergence criteria, despite the increase in security expenditure, owing mainly to higher non-tax revenue (the sale of 3G licenses) and the decline in capital expenditure resulting from the slowdown in infrastructure projects.

Gross financing needs were covered mainly by budget assistance and the issuance of bonds on the domestic and regional markets. Overall, public debt is sustainable and Burkina Faso’s risk of global and external debt distress continues to be moderate.

Medium-Term Projections
Without taking into account the impact of the COVID-19 global pandemic, which has not yet been assessed, growth is projected to fall slightly to 5.8% in 2020, with this downward trend continuing owing to the security and humanitarian crisis. These projections will be impacted by the spread of the coronavirus, climate events, the worsening of the security and humanitarian crisis and, in the event of a global recession, the possible decline in cotton prices.

Inflation is expected to increase to over 2%, as security threats could reduce the food supply. However, it is projected to remain below the 3% limit set by WAEMU.

The current account deficit is projected to increase but to remain fairly well controlled and stable at roughly 4.5% of GDP during the 2020-2022 period. A trade surplus of approximately 1.5% of GDP on average is expected during the same period. Three main factors will contribute to this expected surplus: the increase in gold exports, the decline in oil imports, and the consolidation of the government budget, which is expected to contribute to lower demand for imports.