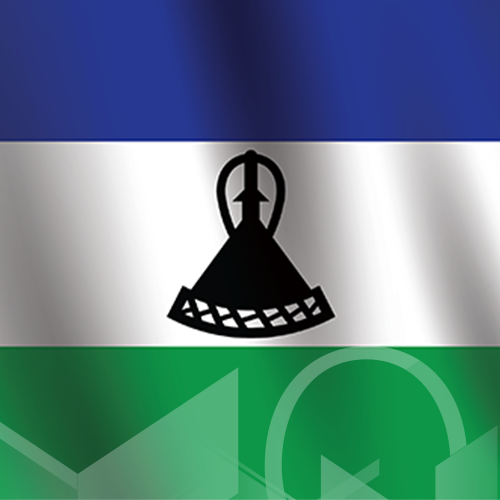 Lesotho is a small, mountainous, and landlocked country, surrounded by its much larger neighbor, South Africa. It has a population of about two million, and nominal per capita gross domestic product (GDP) of $1,299.

Lesotho is classified as a lower-middle-income country. It is mostly highlands, with its lowest point 1,400 meters above sea level. Previously a British protectorate, the nation gained its independence in October 4, 1966. A constitutional monarchy, Lesotho is ruled by a king as Head of State, and the Prime Minister as Head of Government, governed by a 33-member Senate and a 120-member National Assembly. Elections were held in June 2017 for the third time in five years, leading to the formation of a four-party coalition government, led by Prime Minister Thomas Thabane.

Economic growth
In recent years, Lesotho's economic performance has been negatively affected by sluggish global economic growth amid a major downturn in both emerging markets and advanced economies. Furthermore, sustained political instability in the country, coupled with slow economic growth in the South African economy, also contributed to slow economic performance. Real GDP growth rate is estimated to have averaged 1.6% between 2015-2019 and it is projected to average 0.6% between 2019-2021, largely attributed to the expected negative impact of COVID-19 (coronavirus).

In the medium-term, economic growth is expected to be boosted by construction-related projects including construction works associated with the second phase of the Lesotho Highlands Water Project (LHWP II), the Lesotho Lowlands Water Development Projects (LLWDP -I and-II), and government roads. The water and electricity subsectors are expected to be boosted by green energy projects, while the tertiary sector is envisaged to be supported inter alia by government initiatives to reinforce financial inclusion.

Over the same period, extreme poverty declined from 34.1 to 24.1% while the poverty gap declined from 29.0% to 21.9% leading to a lower Gini coefficient, hence the narrowing in the income inequality in the country. As such, Lesotho is more equal than its neighbors, with a Gini coefficient of 44.6. However, it remains one of the 20% most unequal countries in the world
.
Development Challenges and Risks
COVID-19 poses some challenges to global health systems as well as social and economic prospects at large. This has spillover effects onto Lesotho by way of slower economic activities and risks to vulnerable people.

Lesotho's economy is significantly open to global trade. COVID-19 is expected to impact supply chains, thus hampering trade, as most textiles and apparel firms in Lesotho source raw materials from China, which is the epicenter of the COVID-19. Furthermore, commodity exports to major economies such as Euro Area and the United States are most likely to be negatively affected. The tourism sector is also expected to be negatively affected by the advent of COVID-19.

High HIV/AIDS prevalence and tuberculosis remain Lesotho's greatest health challenge. The HIV prevalence rate in Lesotho is 25% percent in the adult population (15-49 years), the second highest in the world. The incidence of TB stands at 611 cases per 100,000, according to the World Health Organization's Global TB report 2019. While high health costs exert more pressure to the fiscal burden, high HIV/AIDS and TB rates continue to contribute to persistently high inequality and poverty.