The WoW report on Mining in Southern Africa gave me great courage. Just paging through all the “Corporate Actions” that are taking place in all the Southern African countries, besides South Africa, shows that interest and investment in mineral exploration is alive and well in the region.

Various Southern African countries reported to have been listed as being in the top league of world producers for several minerals. As a region, Southern Africa has a wide range of valuable minerals and thus is not entirely dependent of the fate beholden onto one single mineral.

Furthermore, geologists and exploration companies, now that they have improved tools and techniques at their disposal, reckon that quite a few unexplored reserves are present in the region.

This indeed is the kind of news to become optimistic about the future of the region. That is the one side of the coin but we also have to say something about the other side.

History tell us that citizens in resource endowed countries have not benefitted therefrom; instead value add from the extraction is mostly realised by the developed economies. Is the natural resources curse going to be reversed going forward? Indeed one has to ask the question, if the region is so well endowed with minerals, and their extraction activities contribute meaningfully to each country’s GDP, why is it then that most of these countries still rank at the tail end of national wealth (GDP per capita).

Let’s look at WOW’s 4 countries in the top 5 for mineral exports: Namibia is ranked number two and with a population of only 2.5million, they could meaningfully improve the livelihood of their citizens by sharing this natural resources wealth among their population, but that the benefits are not that visible impact. Mozambique, number 3 on the list, lost over 36% in exports, saw Totalenergies close down its gas exploration offshore from Cabo Delgado province and has had no real economic and developmental progress but in its capital Maputo for decades. Number 4 is Zimbabwe, has instead experienced economic and welfare regression. Lastly number 5 is Angola. Angola has poorer living conditions than Mozambique and lost 64% of its mineral exports in 2020 compared to 2019.

So, why did we skip number One viz. Botswana? Perhaps because it can be argued that it’s somewhat an exception. Before commenting, one should realise that Botswana’s exports almost dwarfs the other countries’ exports. Botswana exports 2.5 times more than Namibia (number 2). Its major export is diamonds. Diamond exports from the region account for USD 4.85 trillion or almost twice the aggregate value of the exports of all other major minerals (Nickel, Uranium, Copper, Titanium, Granite, etc.).

Botswana has been lauded for its good governance. That made it possible for the country to grow its economy on the back of its mineral resources in spite of having to deal with a number of challenges, some of them shared by other Southern African countries. The country is landlocked, does not have a large economy with a population of only 2.4 million and has limited infrastructure network links. This became a major hindrance when they embarked on a drive to diversify into coal. Their lack of suitable rail transport and links into South Africa’s rail transport to harbours, proved difficult and now the horizon to achieve the viability of this resource labelled a “dirty energy source” has become shorter, putting a different spin on the investment consideration.

Without fail, most of the countries with good governance processes tend to be more equitable compared to those with weaker ones. From the table below one can glean that with better governance higher wealth and more equal income distribution are in evidence:
Botswana has achieved the highest average wealth per capita of the Southern African countries referred to.
Wealth distribution is also more equitable, being in the top league only surpassed by Angola, where the GDP per capita is much lower than Botswana, which does not help either.

Equality of referenced countries is still far off compared to Norway (endowed with oil) and Belgium which demonstrates that you do not need resources endowment for high equality. South Africa, generously endowed with natural resources generated proportionally more wealth, yet its poor governance record shows very high income inequality. 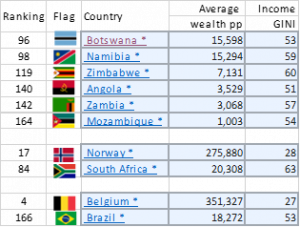 The WOW report also outlined some of the weaknesses preventing countries to benefit from mineral wealth. Power, road and rail infrastructure, skills and good governance, are sadly all in short supply in all of the Southern African countries.

In spite of competition from other countries with similar mineral resources, the opportunity remains to take advantage of many deposits that are still not exploited, in an environment of rising demand for various minerals due to the recovery of the world economy. Corporate activity in the region also supports a positive outlook for investment in the region. Good governance and investment friendly policies need to be a priority to realise durable economic development (Education, wealth, health and standard of living) for all the citizens.

Millions of people still live in poverty in spite of the endowment of Central Africa’s natural resource wealth. This phenomenon has been a topic for discussion and research to understand...